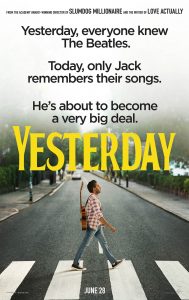 The movie “Yesterday” tells the story of a struggling singer/songwriter who, after a freak worldwide blackout/time shift, seems to be the only person who remembers the songs of the Beatles. In this new reality the band and their music never existed. He transcribes and records the Beatle’s songs from memory and becomes one of the worlds biggest rock stars. Along the way he meets up with two others who also remember the music and thank him for sharing it with the world. It’s a charming and whimsical little feel-good film that became a surprise hit.

When I saw “Yesterday” I was struck by the thought-provoking message it holds for all of us, especially artists: How would the world be different if we didn’t make our unique contribution?  What if your contribution really will make the world—or someone’s life–better? What if something really is lost if you don’t contribute what you have, what you were designed for?

That message came to mind recently when I saw a 1985 video of U2 playing their song “Bad” in concert. A young and earnest (and mullet-ed) Bono belts, “If I through myself, could set your spirit free, I’d lead your heart away, see you break, break away, Into the light…”   As a young Christ-follower in the 80’s I was energized by U2’s hopeful, spiritual lyrics, and unique sound. The “Wide Awake in America” EP help get me through some dark times. After watching “Yesterday” I felt a distinct tinge of wonder and gratitude that U2 exists. A world without their music, like a world without the Beatles in “Yesterday,” would be less inspired and joyful, and my journey of trying to live a vibrant faith in the culture would have been harder.

The existence of art that reaches and moves us really is a sort of miracle. It affirms how much God cares for us individually and wants us to know joy. But it is also evidence of a hard-won victory. Someone had to extend effort, persist, take courage, and wait for timing in order to bring it to us.

And I wonder, were there other bands and songs, works of art, events, or writings that could have made a difference to me and to the world, but never became reality because of fear, or procrastination, or settling for comfort?  Are there things God wants to release through you and me that will bring joy and his kingdom to the world, if only we will collaborate with him?

The answer is “Yes!” Ephesians 4:10 says that God created us with specific “good works” in mind, specific contributions that it’s possible only we can make.  So, I ask again, what if something really is lost if we don’t contribute what we have, what we were designed for?

This is true for every one of us, and I think in heaven we’ll be astounded by how our little acts of obedience to God’s leading shaped lives (including ours) and changed the world.  Artists and makers have the privilege of creating things that can take on “a life of their own”, going far beyond us and our intentions in creating them, and that really can make the world a better place.

Considering that, here is a challenge for you: What is the last thing you felt God inspiring you to do, but you didn’t do? What would it look like to circle back around, ask for his direction on how to do it, and finish that thing? It could be he has something good for the world that he’s just waiting bring into existence through you.

J. Scott McElroy writes about the faith journey, and advocates for the arts and creativity in the local church. He’s the author of Finding Divine Inspiration and The Creative Church Handbook: Releasing the Power of the Arts in Your Congregation, and director of The New Renaissance Arts Movement.  He blogs at JScottMcElroy.com. Reach him at Scott (at)TheNewR.org