When the “30th Anniversary of The Joshua Tree” Tour was announced a while back, I was–to use a 1987 word–stoked. We never go overboard in paying for concert tickets–I’ve passed on pricey U2 shows before–but this one is special (they play the entire album through), and the family will be headed to Louisville on June 16th.

I must admit, U2 is still my favorite band. This, even though staying up-to-date on quality new music is a priority at our house. Great new bands and their songs (as well as a stream of worship music) circulate through our Pandora, Spotify, Youtube, etc. accounts. But U2’s classics and their new music 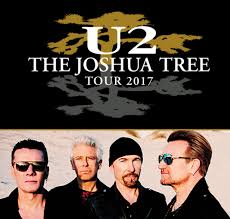 hold a special place in the sonic ecosystem.

As a young Christ-follower, I was energized by U2’s often hopeful, spiritual lyrics, and unique, powerful sound. They had something special, something that Eugene Peterson once identified as sort of a “prophetic edge.” “If they do not explicitly proclaim the Kingdom, they certainly prepare the way for that proclamation in much the same way that John the Baptist prepared the way for the kerygma of Jesus…”1

Since my younger days, a dozen new years have started with a spin of “New Years Day” at ear-bleed level, many road trips have begun with “Where the Streets Have No Names”, “Beautiful Day” or “One Tree Hill” on the mix tape, and more than a few evenings have ended with one last play of “40.”  Like a musical Where’s Waldo, you might find the band’s music popping up in scenes of my life through the decades. (“Bad” is #1 on my list of “Top 15 Soul Soothing songs.”) Their longevity as a unit, immense body of excellent work, consistently positive message, even (for rock stars) the clarity of mind as they age, is exceptional. Bono, with his passion for justice, and surprisingly eloquent Christian witness, is one of the few famous people I’d like to have dinner with. (See also Bono’s recently interviews on the Psalms with David Taylor at Fuller Studio.) Yes, these guys are not “perfect examples” of Christians, and as rock stars who’s every move has been recorded for 35 years, you’ll find some sinful things and bad choices in their history. But that’s my story, too.

In a recent Rolling Stone interview, guitar player the Edge reflects on the impact of The Joshua Tree album and how it captured a moment in history that seems to be replaying itself. A time when there was unrest and the country seemed to be especially divided. The songs of The Joshua Tree were speaking into the cultural melee in 1987 and seem to be unexpectedly relevant again.

If you subscribe to theologian Walter Brueggemann’s definition of a prophet as “an uncredentialed spokesmen for God,” 2 U2 seems to fit the bill. The band’s music has always had a prophetic aura about it, and the Edge’s acknowledgement of that on The Joshua Tree album reminded me of how I felt about another timely record in their discography; 2000’s All that You Can’t Leave Behind. “Beautiful Day” (see below) brightened the mood of the entire world, and its positivity captured the attitude of the U.S. before September 11th. It was a sharp contrast to the state of mind after the event, but remarkably, the

album spoke to that, as well. “Walk On (see special 9/11 version below),”  “Stuck in a Moment,” “In a Little While,” ” Peace on Earth,” and even “New York” provided salve for our wounds and a sense of perspective after 9/11. It was a profound and prophetic album (yet elementally simple) perfect for that time. Even the videos, recorded and released well before the 9/11 event, have a prophetic edge, incorporating 747s taking off and landing as the band plays on the runway. (see “Beautiful Day” below.) After 9/11 those jets would become identified for a time as tools of destruction, but I think U2’s innocent use of them in the videos is an affirmation (even though, yes, the video is a bit racy) that those songs were given to them “for such a time as this.”

And that, to me, is an affirmation that God is and has been working in the culture, that he will continually reach out to humanity through the arts to bring hope, healing, and life. That U2 has consistently been a musical conduit of this, keeps them in at the top of my list.

J. Scott McElroy is the author of Finding Divine Inspiration (Destiny Image) and The Creative Church Handbook: Releasing the Power of the Arts in Your Congregation (InterVarsity Press). He directs The New Renaissance Arts Movement and blogs at JScottMcElroy.com. Reach him at Scott(at)TheNewR.org

1 In the forward to Raewynne J. Whiteley and Beth Maynard’s, Get Up Off Your Knees, Preaching the U2 Catalog,

Post 9/11, U2 sang “Walk On” on the unprecedented TV special “America: A Tribute to Heroes,” September 21, 2001. The song captured the heart break, yet resolve many were feeling. “And I know it aches, And your heart it breaks,You can only take so much, Walk on…” The song would go on to win a Grammy for 2002 “Record of the Year,” making All That You Can’t Leave Behind the only album in history to win two “Record of the Year” Grammys.

U2 once again spoke into our collective post 9/11 consciousness with an incredible performance at the 2002 Superbowl half-time show, honoring the fallen with a giant scrolling screen. Check out 5:45 where Bono prays, “Oh Lord open my lips, so I might show forth thy praise.”