God often gives us strength, but he invites us to take courage. Here are 8 tips on how to do that.

(This article appears on Crosswalk.com and the Salem Network.)

“But on the night immediately following, the Lord stood at (Paul’s) side and said, ‘Take courage; for as you have solemnly witnessed to My cause at Jerusalem, so you must witness at Rome also.’”  Acts 23:11

Paul is a courageous man. He’s championed a message many see as a threat, been tortured and beaten, and now he is in prison after surviving a violent brawl that he started. In the morning Paul will learn that a team of 40 assassins who have taken an oath to kill him are on their way. Even more courage will be needed 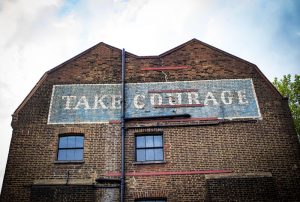 for the next leg of his journey, so Jesus appears to exhort Paul to take it.

This story started me thinking about how courage works. I wondered, did Jesus appear to Paul to just deposit the courage he needed in him so that he could go on? And I must conclude, no.  Jesus seems to be directing Paul to engage his will to be courageous.  Certainly, the Lord’s appearance strengthened Paul. And the Bible says that, in addition to exercising our faith to develop spiritual strength, God will give strength to us as we ask for it. (Isaiah 40:28-31) But courage, the step beyond strength, seems to be Paul’s–and our–choice to take.

Courage requires activating our will. And, for Christ-followers, it’s not just our raw will power that gets us to courage, but our will collaborating in faith with Gods purposes and plans. When we turn our will to him, he empowers it, and will strengthen us every step of the way. (Philippians 2:13)

While assassination attempts and grueling journeys aren’t generally part of our Western experience, a level of courage is needed for anything confronting us that requires the engagement of our will + action. Calling on strength that God provides, we engage our will to overcome fear and act in faith. In fact, we often snatch courage from the jaws of fear. As Mark Twain said, “Courage is not the absence of fear, it is acting in spite of it.”

So how do we cultivate courage? How do we become more courageous?

8 Tips to Help You “Take Courage”

Meditate on, memorize, and speak out scriptures about courage.  If anything can strengthen us to take courage it’s internalizing the words of the Bible,

which “…have divine power to demolish strongholds.” (2 Corinthians 10:3-5), are “…alive and active. Sharper than any double-edged sword” (Hebrews 4:12), and “God-breathed… so that the servant of God may be thoroughly equipped for every good work.” (2 Timothy 3:16-17). (You can get scripture meditation recordings—pure scripture set to music—named “Fear-Less” and “Courageous” to help meditate on verses about those topics.)

Develop the skill of listening for God’s voice. When we take time to listen for God’s still small voice, he will often guide us through difficult situations and strengthen us. With practice, any Christian can develop this skill.  He’ll likely not appear in a vision as he did Paul, but there are numerous times he’s spoken to my heart and prepared me to take courage in advance of something. That always builds my faith.

Recognize that not even an encouraging appearance from Jesus overrides the engagement of your will in the process of courage. While Jesus may have physically appeared to Paul—the most encouraging thing we might imagine–most “take courage” exhortations to Bible characters came through other means; mentors, friends, fellow believers, scripture or events.  Like Paul, each person still needed to engage will + action, just like us. We shouldn’t expect those instances of encouragement—no matter how wonderful–to just give us courage, we still must take it.

Keep a journal of things God has done when you have taken courage. It is incredibly easy to forget how our history has been affected by our own or someone else’s acquisition of courage. On the journey to the promised land, the Hebrews repeatedly lost sight of how the courage they embraced to cross the Red Sea, fight regardless of overwhelming odds, and more changed everything. They had to write songs and repeat stories about it to remind themselves.  Keeping a record of how God meets you when you take courage will deepen and embolden your faith.

Study people who have taken courage and the fears they overcame. In addition to Bible characters like David, Moses, Joshua, Gideon, Jesus, Paul and many others, you can find countless models for courage in historical figures like the early martyrs, the Reformers, the American founding fathers, Abraham Lincoln, Harriet Tubman, Corrie Ten Boom, WW II Pfc. Desmond T. Doss, and so many others. Ingesting stories of courageous-yet-flawed humans helps us imagine what it looks like in our lives.

Ask God to help you identify the fears that are holding you back from taking courage. Give them to God daily. Jesus knew we would all struggle with fears and troubling tendencies. That’s why he provided for the naming and continual overcoming of those things in the Lord’s prayer. “And lead us not into temptation (the temptation of fear, and of giving in to sins we struggle with) but deliver us from the evil one.” (Matthew 6:13) We will not be perfect in this life, but by calling on God’s strength we can choose to be courageous.

Imagine the things you’ll do with God if you accept his invitation to take courage. Think of things you’ll miss out on if you don’t accept.

All the things that God planted in you, the “good works” (Ephesians 2:10) that he designed you for, will require courage. He gave you an imagination to envision in faith what they might look like. This is scriptural; faith requires imagination, it is “the substance of things hoped for, the evidence of things not seen.” (Heb. 11:1)

Imagine if Paul decided to throw in the towel and not take courage in that prison cell. The Good news might never have reached Europe. People are waiting on the other side of your courageous obedience.

Take the next faithful step.  We often want to know what our journey will look like or where we’ll end up, thinking that knowing would give us the courage we need. But worrying about the future produces anxiety and control. The antidote for that is simply seeking God for the one next faithful step you can take.

When Jesus appeared to Paul, he didn’t tell him everything that would happen on the journey—the shipwreck, the venomous snake bite. Paul had to take courage, trust God’s plan, and take the next faithful step, then the next, and so on. Generally, God doesn’t “make” us do what he has planned. We must engage our will, disregard fear, take a step at a time, and take courage.

J. Scott McElroy writes about faith and advocates for the arts and creativity in the local church. He narrated the “Fear-Less” and “Courageous” scripture meditation CDs and is the author of Finding Divine Inspiration and Creative Church Handbook. Reach him at Scott (at)TheNewR.org

Here is some extra inspiration for you! 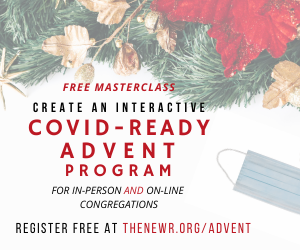