Since the beginning of human history storytellers have been known to use dramatic license to make a story more interesting or to exclude certain details that aren’t to their liking. Think of Adam and Eve, who each told only part of the story when God questioned them about their little encounter with sin. Or imagine the first person who exaggerated the size of the amazing fish that got away. People rarely tell stories from an objective perspective. So it shouldn’t be a big surprise when filmmakers (perhaps today’s most powerful storytellers) make exclusions or take liberties when they tell a tale, especially—given Hollywood’s well-known discomfort with Christianity—stories of faith. Recent examples include portraying Noah as a murderous environmentalist, God as a demanding and cruel child in Exodus, and minimizing the main character’s Christian faith in American Sniper.

But downplaying or excluding faith is not just an annoying tendency in TV and movies, it’s a totally inaccurate depiction of reality. Research shows that faith is a regular topic on the mind of most Americans. In a 2013 Pew research study about prayer 55% of Americans (not just the religious) said that they pray every day. So, though more than half of all people in the U.S. claim to pray daily, that is rarely portrayed or mentioned in TV or movies. For instance, it’s not hard to imagine that the 55% of those who pray daily would be inclined to whisper a prayer when they are in trouble, so an authentic representation of how people act in peril would have at least one half of people doing that. Yet how often do you see a character on TV or in a film pray in a dangerous situation? It’s probably closer to 1% of the time.

I don’t mean to bash Hollywood here, but I think this is a fair observation to make. Faith and the widespread practice of prayer are seldom portrayed accurately in major mainstream entertainment.

But occasionally somebody gets it right.

Fury, which stars Brad Pitt and Shia LaBeouf and released on DVD January 27th, is one of those rare films.
It’s the story of an American Sherman tank crew during the last days of WWII and the family-like bond they develop. Rated R for plenty of violence, gore and profanity, it also includes a surprising amount of positive spiritual conversation. Brad Pitt plays tank commander Sergeant Don “Wardaddy” Collier and Shia LaBeouf is gunner Boyd “Bible” Swann. Swann is damaged and broken by the horrors of combat like the rest of the crew but he retains his hope and his faith, and the other men respect and draw from him. They have conversations about whether Jesus loves Hitler, they pray over their food, and Swann refers to his proficiency as a gunner in fighting the clearly evil Nazis as “doing the Lord’s work.”

In one scene he kneels beside a dying American soldier and asks, “Do you know Jesus?” When the soldier nods he says, “Then everything’s going to be alright.” The director, David Ayer, doesn’t play it like a strange or fanatical moment, but makes the exchange seem like a natural and normal part of what might happen during battle in WWII. Michael W. Nicholson, in his review of the film, says:
“In between, the story of redemption is woven into a story of battle primarily through the dialogue and interaction between Collier 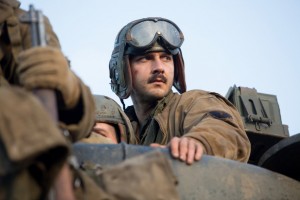 and Swann, facilitated by more biblical references, imagery and allusions. Building up to the climactic final combat, in which, alone, the crew must… save their division from destruction, Swann begins to recite 1 John 2:15-17, “Do not love the world …”, and is surprised, as we are, when Pitt’s Collier (the hardened tank commander) continues it for him, “If anyone loves the world, the love of the Father is not in him … the world and its desires pass away …”. Swann finishes, “ … but the man who does the will of God lives forever.” This exchange becomes the benediction for the crew. A bit later, cramped into the claustrophobic confines of the tank just before the Germans attack, Swann exhorts his comrades, “This is a righteous act”, and quotes Isaiah 6:8, “Then I heard the voice of the Lord saying, ‘Whom shall I send? And who will go for us?’ And I said, ‘Here am I… send me.” “Isaiah chapter six,” Collier adds, and this time we are not surprised.”
It may seem unusual to have this much spiritual dialogue in a violent war movie, but Fury is probably much more accurate than many combat movies of the last 30 or 40 years. A recent study of WWII soldiers by Cornell University professor Brian Wansink called “Are there atheists in foxholes?” found that indeed, in the heat of battle the percentage of those who reported praying jumped to 72%. Statistically, there would have been at least one praying person in any five man tank crew and God, prayer, and spiritual matters would have been common topics; a fact that this film accurately reflects.

Interestingly, Shia LaBeouf, who played Boyd “Bible” Swann on film, says that he actually became a Christian as a result of playing the part of this strong Christian character.

Fury is not a “Christian movie” in the way that we expect Christian films to be sort of positive and encouraging. Again, it’s filled with R-rated violence and profanity. But it offers a realistic look at what it might have been like for an imperfect but committed Christian to live out his faith in the middle of hell on earth and the effect his witness might have had on the men around him.
I found this inspiring and encouraging and I really appreciated that the filmmakers didn’t make it seem preachy or forced; it just feels authentic.

And isn’t that how we are called to live as Christians: authentically? Not as hyper-spiritual know-it-alls who won’t associate with sinners, but as real people who acknowledge our imperfections, choose hope in difficult situations, and are willing to let the light of God’s love shine through our often battered bodies and souls to those around us.

You know…maybe one of the reasons for Hollywood’s perceived bias against faith has been that filmmakers and folks producing entertainment don’t know many authentic Christians. Maybe we should pray for more modern day Boyd “Bible” Swann’s in the halls of movie studios, so that we might see more of them on the screen. Yes, I like that idea.

As a matter of fact, if you are interested in interceding for Hollywood, contact the Hollywood Prayer Network at HollywoodPrayerNetwork.org.

J. Scott McElroy is the author of Finding Divine Inspiration (Destiny Image) and The Creative Church Handbook: Releasing the Power of the Arts in Your Congregation (IVP, April 2015). He directs The New Renaissance Arts Movement and blogs at JScottMcElroy.com. Reach him at Scott(at)TheNewR.org