While we were in Canada I spoke at a Toronto area Vineyard church that was interested in the Finding Divine Inspiration message. Scott Roe, Pastor at the Cambridge Vineyard– which is on the grounds of a lovely old monastery

–opened his church up to us not knowing if anyone would show up.  We were both surprised when people just kept coming…until the fairly small room was packed out. These Canadians were our most attentive and inquisitive audience so far, and their questions were excellent.

One person asked a couple of questions along the lines of, “ Who can be called an ‘artist’?” and “What art is ‘good enough’  be displayed in the church?”.  Important things to ponder when talking about a New Renaissance in the church.  Of course, the fear behind that question is that “everyone” will start making art that God “told them to”, and instead of getting away from the reputation that Christian art is schlocky, we will perpetuate it.

In any given church, there may be a huge range of people who get involved in the creative process, from the child with crayons, to teens expressing their angst in sketch books instead of listening to the sermon. From the adults who think they might be an artist and want to explore that, to those who have been trained, have mastered their craft and are making a living at it.  On both ends of the spectrum you can have some flawed thinking. The beginner—even the adult– might have a  “making art is magic” mindset, believing it will all just magically come together or that God will instantly make them a good artist. The master may have an elite view that only those who are accomplished are truly artists.

Making inspired art requires inspiration from God, but that doesn’t necessarily make the work effortless. Although God can empower beginners to make meaningful art, as a rule we collaborate by learning the craft and growing our skill. I understand those who are trained and accomplished wanting to protect any progress that’s been made in upgrading the quality of “Christian” art—I certainly want to do that—but I suspect God’s idea of what art is or who could be called an artist, is not so exclusive.

On this trip to Canada I visited a funky district in Toronto called Kensington Market , where I was inspired by a place called “Wanda’s Pie in the Sky”. I love pie, so I took the existence of a pie restaurant as a gift from God.  But He also gave me something a little more substantial. In a cramped used bookstore that was playing Mexican trance music, I found the book, “The Arts and Human Development”  by Howard Gardner. 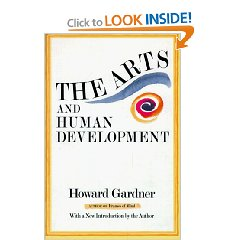 It seemed God led me to this book, as he has wonderfully done so many times. I read in the preface Gardner’s thoughts on this question I been asked just the     night before.

“Perhaps the chief mystery confronting the student of artistic development is the relationship between the mature adult practitioner—the skilled poet , the painting master, the virtuoso instrumentalist or composer—and the young child playing with words, humming and inventing melodies, effortlessly producing sketches and paintings while engaging in many other activities that have only a tenuous relationship to the arts. Clearly there are important differences in skill, acquaintance with the artistic tradition, sensitivity to nuance between the child and the adult participants in the artistic process. But a more fundamental question for the psychologist is whether the schoolchild must pass through further, qualitatively different stages in order to become an artist. On this question I have arrived at an unexpected conclusion: the child of  7 or 8 has, in most respects, become a participant in the artistic process and he need not pass through an further qualitative reorganizations (to be called that).”

Interesting!  So Gardner seems to think that if a person– a child in this case– is involved in the artistic process, they could be called an artist.

Whether you agree with Gardner or not, you can’t deny that with technology the ability of the average person to be creative—even artistic—and express themselves in a public arena, is greater than it has ever been. Nearly every kid I know has a Myspace or Facebook page where they are constantly creating and adding content, photos, stories, ideas, and messages. This explosion of access to creative tools may change the world in the next ten years.  In the future the majority of people may be adept at some kind of creativity, even artistry.  We may experience interactive creativity and art in ways we never dreamed possible. We in the church need to embrace the wave of accessible creativity and try to discern how God can speak through it. The Church can and should be involved in the business of drawing out people’s creativity and connecting them to the source of it.

The Body of Christ will be on the road to maturity, and the world will see a more accurate representation of God’s personality when all of our gifts—fully developed or not– are able to work together and flourish in the Church.  Therefore, I think there should be a place in the creative life of a church for most people who feel drawn to making art, from the beginner to the master.  That doesn’t mean everyone’s work gets displayed publicly, but there are ways to encourage people of all skill levels to collaborate with God.

So how can we open up our churches and our minds so that more people can get involved in the creative process, yet continue to raise the quality of our art?