I just finished reviewing a yet to be released book called Empowered Creativity from a fiery young author named Art Thomas.  I particularly enjoyed this thought about working in the “family business”:

In the culture of the Bible, as soon as a child reached the teenage years, he or she was considered a full-fledged adult.  When a young man reached the age of his bar mitzvah, he was welcomed into manhood and given responsibility in the family business.  The father would announce to the town, “This is my beloved son in whom I am well pleased,” which essentially implied, “This young man represents me.  I support him completely and have given him my seal of approval to represent me and carry on the family business.”

If you remember what it was like to be a teenager, you might be wondering if this was wise!  Adults often think of teenagers as brain-damaged risk-takers with untamable hormones.  But biology hasn’t really changed in the last few millennia—only our perspectives and expectations have.

The extra bit of information we don’t often think about is that the newly dubbed “man” spent his childhood working alongside his father, learning the family trade.  Jesus, for instance, would have watched Joseph preparing wood, drawing plans, and expertly crafting tools and structures.  By the time Jesus was considered a man (at the ripe old age of thirteen), he already had more hands-on experience and insight about carpentry than someone today who may have attended a trade school. 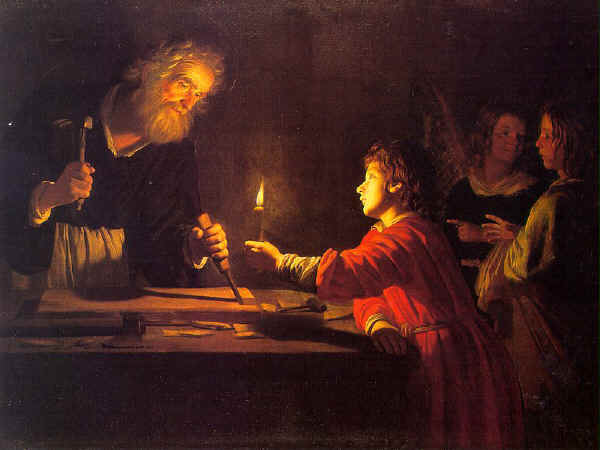 By spending time with their fathers, the young men of Israel learned to run the family businesses.  Craftsmanship and skill were taught, handed down, and developed.

Our Heavenly Father has a family business as well.  He is a Creator who deals in acts of love and power.  If He can’t make something with the elements that are available, He simply speaks new elements into existence.  He is so creative that He thinks outside the realm of what exists.  He calls things that are not as though they are. (See Romans 4:17.)  He dreams, He invents, He forms, and He empowers.  Our Father’s business can be summed up as this: “Limitless, Love-filled Creativity in Action.”

How do we get involved in the family business?  The same way the young men of the Bible did.  We spend time with our Father.  We study His craft by watching Him at work.  We learn from the projects He has done in the past.  We ask for insight about the projects that now need to be done.  We pay attention and learn from present-day demonstrations of His work.  In this way, we learn the family business so that, like Jesus, God can declare over us, “This is My beloved son, in whom I am well pleased,” thus commissioning us into the family business. (See Matthew 3:17.)

That’s what I want to hear! Thanks Art. Good stuff!