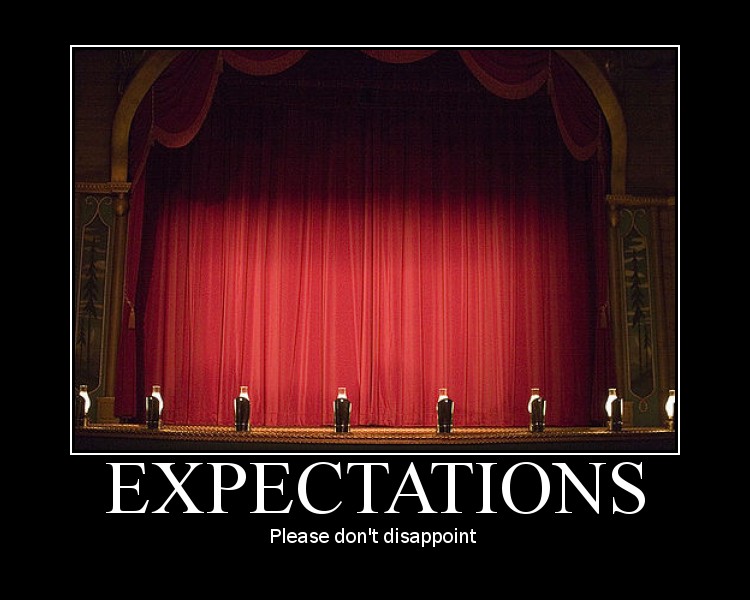 I felt God drawing me to Isaiah 53 during quiet time today. I’ve read that passage many times and honestly wasn’t very excited about going through the suffering and sorrow and punishment again. I had hoped that God would lead me to something “positive and encouraging”, the kind Christian radio stations promote, minus the blandness.

After reading the chapter, I turned to my NIV Matthew Henry Commentary for a little extra insight. Henry was an incredibly perceptive pastor and bible commentator whose monumental work has been revered since it was published in 1708.  What I found there today was beautifully relatable.

Recently my family has been dealing with unmet expectations in a number of areas. Of course, this is part of the human condition, and as believer’s we remind ourselves that God’s ways are not ours. Still, disappointment is tough. So, when I came across Henry’s thoughts about the Jewish expectations for the Messiah, I was reminded of God’s brilliant, often confounding way of doing things. His plan sometimes seems completely at odds with what we think needs to happen to accomplish a goal– in this case the redemption of the world.

Henry comments about the “low condition (Jesus) submitted himself to, and how he abased and emptied himself”. We’ve heard this a thousand times, but Henry adds more light to our knowledge with some additional facts shared in his unpretentious poetic style.  He reminds us that Jesus’ “entry into the world, the character he wore in it (were) in no way agreeable to the ideas which the Jews had formed of the Messiah.” He writes:

“It was expected that his ancestry would be very great and noble. He was to be the Son of David, but he sprang out of this royal and illustrious family when it was reduced and sunk, and Joseph was but a poor carpenter. This is here meant by his being a root out of dry ground, his being born to a humble and despicable family, in the north, in Galilee, of a family out of which, like a dry and desert ground, nothing green, nothing great, was expected, in a country of such small repute that it was thought no good thing could come out of it. It was expected that he should make a public entry, and come in pomp with recognition; but instead of that, he grew up before God, not before men. He grew up like a tender shoot, silently and invisibly, as the grain grows up, we know not how, Mark 4:27. It was expected that he should have some uncommon beauty in his face and person, which should charm the eye, attract the heart, and raise the expectations of all who saw him. But there was nothing of this kind in him; not that he was deformed or misshapen, but he had no beauty or majesty, nothing extraordinary, which one might have thought to meet in an incarnate deity….His gospel is preached, not with enticing words of man’s wisdom, but with all plainness. It was expected that he should live a pleasant life, which would have invited all sorts to him; but, on the contrary, he was a man of sorrows, and familiar with suffering. His condition was, on many accounts, sorrowful. He was unsettled, had nowhere to lay his head, lived on alms, was opposed and menaced, and endured the opposition of sinners against himself.”

Yet, he was joyful in all things, walked with authority in his circumstances, and was content with the path the Father prepared for him.

Henry wraps up this part of the commentary with a statement that annihilates the last remnants of the image of a politically powerful, aloof, glittering messiah. It’s a thought that stirred my heart this morning and cause gratefulness to well up in me for the incredible, merciful disregard for human expectations that the incarnation represents. Henry wrote:

“His spirit was tender, and admitted the impressions of sorrow. Grief was his intimate acquaintance; for he acquainted himself with the griefs of others, and sympathized with them.”

Wow.  Our God and savior not only exudes sweet sensitivity in his person, but embodies  it. He is a Messiah who is totally relatable and compassionate. And then he takes it to another level, not only intimately feeling everything we are feeling, but giving us supernatural strength to overcome struggles through his joy (Neh. 8:10) It also means sometimes he gives us what we need instead of what we expect.

Today this reminded me to look for the provision of God in the middle of unmet expectations. Come to think of it, he even overcame my expectations of getting stuck with a worn and gloomy passage of scripture for devotions, instead providing fresh and significant insight through it!

I feel a “profound thought” coming on….

God’s plan for us may not meet our finite human expectations, but it will certainly, ultimately, in some way, exceed them.

(Graphic used by permission from http://growahealthychurch.com/)

J. Scott McElroy is the author of Finding Divine Inspiration: Working with the Holy Spirit in Your Creativity (Destiny Image), an arts advocate, and founder and director of The New Renaissance Arts Movement, which promotes the arts in the church. Reach him at: Scott@TheNewR.org.

This article also appeared on the Salem Network and Crosswalk.com.